Are you about to be found out?

Home BlogAre you about to be found out?

Are you about to be found out?

How did you get your job?
Can’t they tell you’re not really ‘at that level’?
There are so many other people out there who know more / have more experience / are better…
When is someone going to work out they’ve made a mistake?

Sound familiar? If so, you might be experiencing Imposter Syndrome. I know, isn’t it a relief to know there’s a name for it? It also means you’re not the only one telling yourself that story. The fact is, even (especially?) at the most senior levels, across industries, many highly successful people are just a little bit amazed no one has discovered they are a fraud. 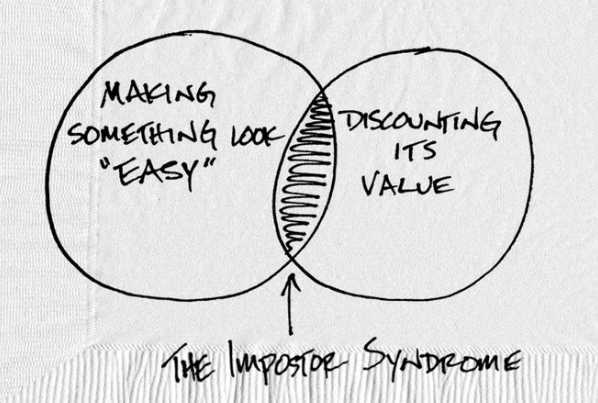 The term was coined in 1978. These days, with gender equality such a strong focus, it’s often used as a possible explanation about what holds back high-achieving women, but it’s definitely not gender specific. In our work with clients, especially in coaching sessions when people are are alone and thus more candid, it is simply gobsmacking how many people experience this. Having said that, our client base will be more likely to suffer from it than the broader population as it’s more common among high achievers (and you’re a clever bunch). It actually stems from genuine humility, which is a good thing, although unchecked it can be debilitating.

So, how to deal with it if you have it? The good news is, simply knowing its name puts it in perspective and goes some of the way to lessening its power. These are some other practical measures you can take:

And if all else fails, check out a google search of ‘famous people with imposter syndrome‘. You’re in fine company.

THIS WEEK IF YOU…

It also highlights the problem with cc-ing someone more senior to get an outcome.

And that’s a wrap, thanks for reading.
Til next time, Vibers.

What you can learn about Persuasion from Waleed Aly

Last week The Project‘s Waleed Aly provided a masterclass in[...]

Why your stories sometimes fall flat… and how to fix that

Story telling has been a big theme in our client[...]

With this new flexibility, what are the new rules?

If you’re like most of our clients, you’ll be experiencing[...]